Company History of Bright of America®

The following is a company history of our products, designs, and manufacturing.

At the age of 17, John Bright began taking pictures. In October 1949, at the age of 19, one of his pictures graced the cover of the national publication Liberty Magazine. It was a picture of the family dog “Mickey.” Bright went on to take many pictures of “Mickey” dressing the family dog up in elaborate, custom made costumes and taking funny pictures of him on elaborately designed sets using his 35mm single reflex camera. Later, these images were sold as magazine covers, advertisements and calendar art.

While in college at West Virginia University, Bill Bright and his brother, John, started traveling around to different churches during the Christmas season to take pictures of them decorated in their holiday splendor. The brothers’ goal was to then sell those pictures back to the church the following year in the form of Christmas cards, postcards and note cards. The churches could then sell the cards as a fundraiser.

By marketing themselves through direct mail, the brothers’ business soon had churches as customers from around the nation. To meet churches’ needs, the brothers would travel in the summer with their car loaded to the top with fake poinsettias and Christmas greenery to give churches the Christmas look even when it was sweltering outside!

Once the Brights graduated from college,  they expanded their little company and gave it the name Bright of America. They moved their operations out of their family’s Summersville home and the company quickly grew to become a major supplier of note cards, postcards, candles, commemorative plates, placemats and just about everything else to churches, women’s clubs and other non- profit groups.

1963: Brothers Bill and John Bright established Bright of America®as a producer of notecards for women’s organizations in their hometown of Summersville, West Virginia. One of the first products were note cards showing scenic views of the state for the West Virginia Federation of Women’s Clubs which were a huge success and the company was off and running. 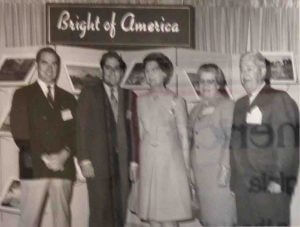 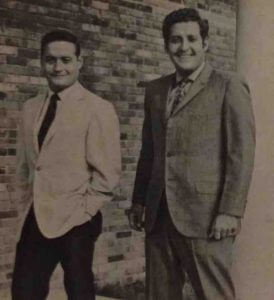 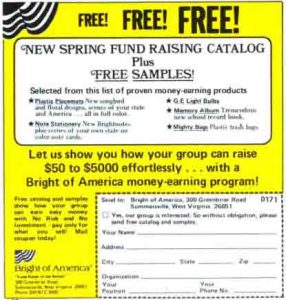 GROWING FAST
1964 to 1979: The business quickly grew and they continually expanded their graphic arts manufacturing capabilities and product lines. Advanced technology Heidelberg 4 color printing presses gave them all the printing excellence they needed and, though their own ingenuity, an automatic lamination line was developed and perfected. The Bright of America® trademarked plastic laminated placemat created a brand new market which the company quickly capatalized on. 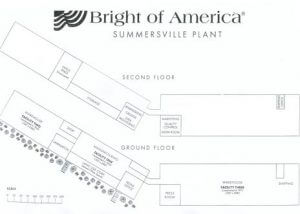 The original product lines included laminated placemats, posters, key tags, magnets, plaques, calendars, planners, greeting cards, stationery, coasters, pencil sharpeners, and more. Anything that the company could print its original in-house artwork became a new product for its growing fudraising business.  During this period, the flag logo, the America Mark notecards brand were established and the tagline, “Fund Raiser To The Nation” was adopted.

As the company’s manufacturing capabilities and product lines grew so did its product development efforts & creative capabilities. Licensing deals with the Children’s Television Workshop, Disney, Care Bears, Center For Housewares Designs, and others along with innovative marketing programs such as their Key Finder Service helped fuel the company’s growth and reputation which led to multiple awards and recognition by customers. 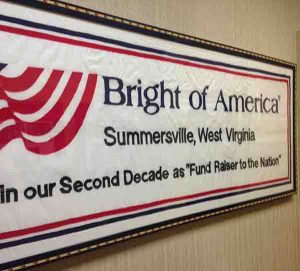 1980: Candle production was added to production capabilities in the Summersville plant. The Crysto-Glass Candle and Canning Jar Candle lines were instant hits.

1983: Bright of America’s company history added a new chapter when it acquired the Lincoln House mail order catalog and began the annual Calendar, Placemat Ensembles, Candles and Christmas acrylic ornament programs featuring art from noted American artists including, Currier and Ives, Giordano, Rudi Nappi, Tom Cathey, Wolfgang Otto, A.E. Ruffing, Carlin, Sharon Harms, Sarah Kay, Roger Cremins, Robert Fabear, N. Chartier, Leigh, Geroge Santos, Carole Wynne to name a few.  The bulk of the art and product ideas, however, were created by in-house graphic art talent such as Phil Skoczen, Jim Pikkart, Annette Burrick, Barbara Stanley, Jean Culling, and Jim Kreitzberg under the direction of Dee Barwick, VP Creative.  Much of the original art is archived and digitized and available for licensing including the company’s registered trademarks.  The members of the Bright of America Creative Group were active in many civic events and were charter members and performers in the local “Off Main Street Players” which produced very successful dinner club theater performances in the Summersville area.


1984: An imported products program was added to diversify the company’s product offering and included Stuffed Animals, Brass, Jewelry, Porcelain, Glass and Wood Products designed by the company and coordinated in ensembles with the in-house manufactured graphics arts products and candles.

Throughout the 1980’s the sales growth was driven by the success of product offerings in mail order catalogs and fundraising programs sold by schools, churches, clubs and other non-profit organizations to earn money for teams, activities,trips, etc.  The rapid high tech order fulfillment system utilizing a state-of-the-art, computerized “pick and pack” line was well ahead of its time and set Bright of America ahead of its competitors.

Product selection at Bright of America followed a disciplined system of product evaluation and screening which weeded out the poor sellers and highlighted the “stars” so that time and money spent on photography, catalog space and inventory was optimized. Soon the Bright of America® name became synonymous with innovative product design and development.

A company brochure published at the height of it’s success in the fund raising market gave the company history this way:

“Bright of America began in 1960 in a spare room of the Bright family home, as a company called Church-Graphic Productions. Church-Graphic Productions manufactured and sold Christmas and note cards depicting church scenes, which were sold to churches to sell as a fund raising program.  In 1963, with the manufacture and sale of note cards depicting state scenes, the company became known as Bright of America and. began adding to its product line Christmas cards and placemats with state scenes.  In addition to stationery items and placemats, Bright of America now offers an extensive selection of quality gift items to fund raisers nation-wide. Bright of America has its headquarters and manufacturing operations in a 200,000 square foot facility nestled in the hills of West Virginia, employing up to 550 people. As the premier manufacturer and innovator of unique quality products for the fund raising industry, Bright of America has indeed become the “Fund Raiser to the Nation”.”

Another dimension of the Bright of America success came from export markets. Sales executives hardly gave a thought to exporting during the firm’s first 10 years. Then something happened. The firm was exhibiting its plastic laminated placemats and other household/novelty products at the Chicago Housewares Show in 1973 and an Australian looked over Bright of America’s products and said he wanted to place an order. The clerks at the exhibit booth were startled. They didn’t know how to take a foreign order, or how to ship products to Australia, or how to arrange payment. Nor did anyone else at the firm. The Australian came to the rescue, telling them to hire a freight forwarder. He said he would pay upon receipt of the merchandise. Bright of America followed his suggestion and he paid promptly and became a steady customer for 10 years.

Bright of America at one time sold its products in at least 40 countries. Maralyn Boley, International Sales Manager, says the company got off to a strong start overseas, but then ran into a roadblock when the dollar shot up in the mid-1980s. “We had to go uphill for a few years, but we hung on. We continued our foreign travel and we kept participating in trade shows. We understood that these things run in cycles. To succeed in exporting, you have to do a little extra,” Boley said. In 1984, Bright of America was named Small Business Exporter of the Year by the U.S. Small Business Administration and the company received numerous WV Governor’s Award for Exporting throughout the 1980’s.

The Fund Raising Catalogs and Brochures Grew To Support Many Different Turn-Key Programs Sold Into Schools and Other Organizations.

The Newest Trending Products and Designs Went Into Exclusive Catalog and Brochure Programs Available To Only One Sales Organization Per Region.

THE SALE AND EVOLUTION OF THE COMPANY HISTORY

1990: The Bright brothers sold the business to Russ Berrie and Company, a large New Jersey based importer and marketer of gift products operating under the RUSS brand.

At the time the company was sold, it had grown to be “an international fundraising graphics, paper converting and marketing firm with between 500 and 1000 employees and over $20 million in sales exporting to over 40 counties and one of the country’s largest placemat producers.” as reported by the West Virginia State Journal.  Bill Bright explained in a 2007 interview, “At one time we were the largest placemat manufacturer in the country.  I knew all of the employees by name. We would make those laminated placemats with pictures of the state on them. People would buy a whole set of their state.”

Following this purchase, Russ Berrie and Company expanded the product development efforts and began to utilize the company’s manufacturing facility located in Summersville, West Virginia to manufacture greeting cards and other graphic arts products and continued expansion of the Bright of America® school fund-raising and placemat operations.

1991 to 2003: Russ Berrie and Company continued the company’s growth through its acquisition of Scentex in 1997 and the creation of the Greenbrier/ Scentex and Practice Power® brands.

Russ also expanded the import programs with the introduction of the wildly popular Troll Doll line under the Bright of America name.

2004: Russ Berrie and Company sold the company to Industrial Renaissance, a group of private investors.

2005 to 2009: During this period the company exited the Fund Raising market and expanded the Greenbrier/Scentex and Practice Power® brands focusing primarily on the in-house candle products and added many new home fragrances products.

2010: Bright of America sold the Greenbrier/Scentex brand and closed its manufacturing plant in Summersville, WV in October, 2010.

Since the beginning, Bright of America® has been dedicated to delivering America’s best designed products, at the best prices, and with exceptional quality.  And, the same is true today as we continue the tradition of Great American Design of innovative wholesale products business to business. Many of the company’s original trademarked product lines and products including Brightline Promotional Products are still being produced on a custom printed basis and much of the original art is available for licensing including the company’s registered trademarks.

CONTACT US TO LEARN WHAT WE ARE UP TO TODAY!